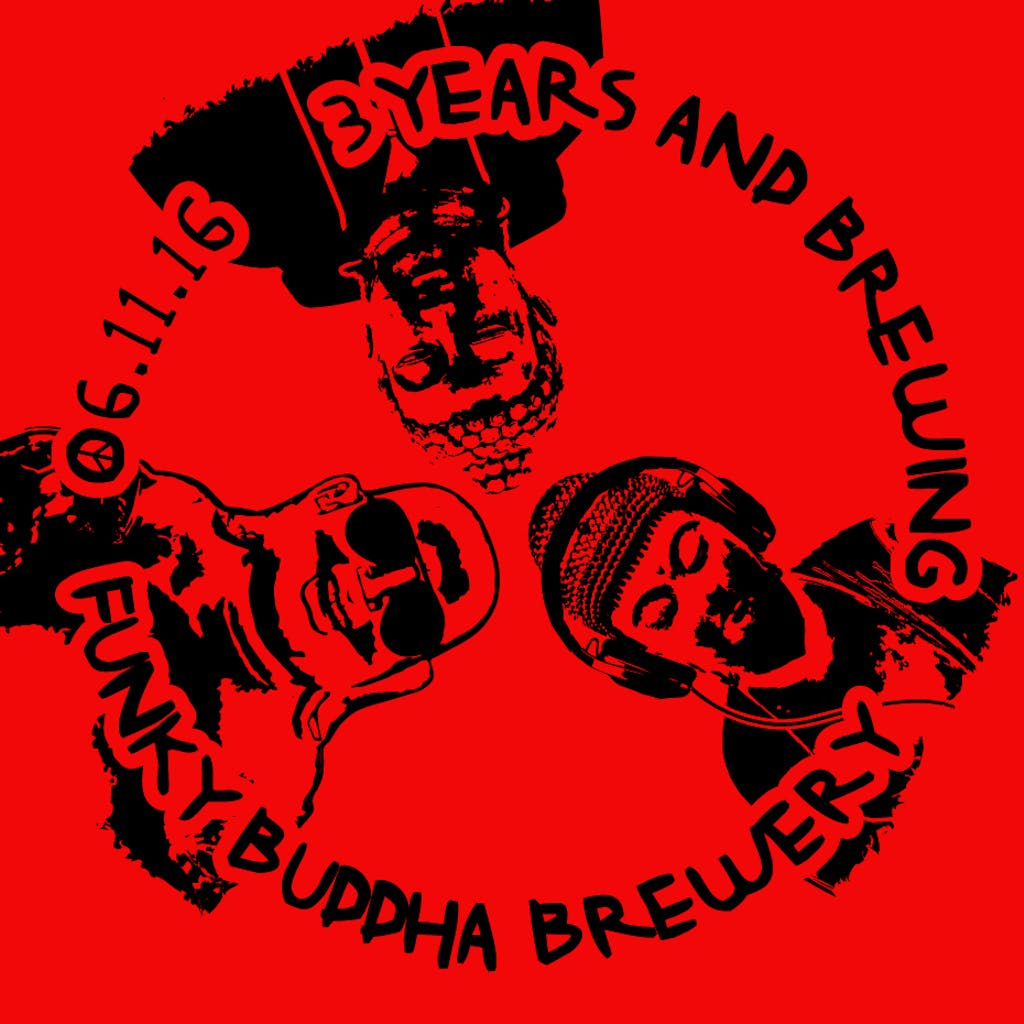 NEARLY 100 OF YOUR FAVORITE AND LIMITED BEERS ON DRAFT

Three years and brewing! Funky Buddha Brewery is turning three, and so we’re going to celebrate with a few thousand of our closest friends! Come join us at our Three Year Anniversary Festival on June 11, 2016 in Jaco Pastorius Park, directly adjacent to the brewery here in Oakland Park. Party from 2 to 10pm with South Florida’s best food trucks, live music by Brotherly Love Productions, and nearly 100 of your favorite brews and limited releases! New this year is nearly 1000 sq. feet of tented space to escape the sun, a new and improved festival layout, even more tables and chairs, and more points of distribution to get cold beer in your hands! Plus, we’re encouraging any attendees that would like to bring their own chairs and blankets and relax in the beautiful and spacious park. The event will cost $8 to enter (this covers entertainment, logistics, and our over 100-person staff to serve you for the day!) and you can buy beer tickets right when you walk in the door! Stay tuned for more information and updates as they become available.

*No rainchecks or refunds will be given. No readmission or reentry. Adults age 21 and over only – sorry no children, babies, infants, or toddlers.

1 beer ticket = $6, available on site throughout the event

Beer tickets are good for day of event only.

Sorry – no outside alcohol will be permitted in the festival grounds.

Q: Will the anniversary cost anything to attend?

A: Yes there is an $8 general admission fee to attend the event. At this time we are not selling tickets in advance.

A: Outside alcohol, food, or drink will not be permitted inside the festival grounds. Unfortunately we do not have liquor license access extending into adjacent parking lots – so should you choose to bottle share in lots nearby you do so at your own risk.

A: Admission to the festival grounds is for adults age 21 and over only.

Q: Can I bring blankets, coolers, chairs, umbrellas, or tables?

A: Blankets and chairs WILL be permitted in the festival grounds, however umbrellas, canopies, coolers, and tables are NOT permitted.

Q: Can I bring my dogs/monkeys/parakeets?

A: We’re sorry, but animals are not permitted in the festival grounds.

Q: What beers will be on draft? Do we need tickets to purchase beers?

A: We will populate the tap list soon. Tickets will be required to purchase all beers. $6 = one ticket = one beer. Pour sizes may vary. We will take cash or credit for ticket sales. Tickets are good for June 11, 2016 only. All sales are final.

Q: Will your tap room be open during the event?

A: Our tap room and brewery will be closed on June 11, 2016. We will be open on June 10th and 12th however, and are planning some special events and tappings for those days as well. More info to come soon!

Q: Will food be available?

A: Yes, we will be hosting a collection of South Florida’s best food trucks and tasty makers. See list above!

Q: Will you have bottles for sale?

A: We will have the following bottles for sale starting at 4pm:

Q: Will growlers be available for purchase or fill?

A: No – growlers will not be for sale during the Anniversary. However we will have custom Anniversary glassware, shirts, and more available for sale in the festival grounds. See the merchandise booth inside to purchase.

Q: Where can we park?

A: We strongly encourage that attendees ride share to the festival. UBER is our ride share partner of choice and there will be a coupon code and promotion announced shortly. If you can’t UBER, please try to carpool to the festival with others. We will be starting a ride share group on Facebook for those interested.

If you do drive, you may park in the following lots. Parking will cost $5 unless otherwise noted
-The public lot directly south of the main tap room entrance. (no fee)
-Either of the grass fields across Dixie Highway
-The east lot that runs behind the brewery
-VIP parking will be located adjacent to Jaco Pastorius Park at the Urban Farming Institute and will cost $10

Q: Is there a good place to stay if I’m coming from out of town?

A: Yes, check out the offers below:

Marriott Hollywood Beach is running a $129 block room rate for all 3-Year Anniversary Day attendees! Plus each guest will receive a complimentary bottle of FB beer!

Book your stay at the Marriott Hollywood Beach now

Q: Are there any public transportation options to the festival?

A: Yes! UBER is the official ride sharing program of our Anniversary Festival. UBER will be running a promotion for attendees that would like a safe ride to and from the event, and we encourage use. New users will receive $20 off their first ride on sign up.

Are you from Tampa, Ft. Myers, or Miami and looking for a way to the fest? Check out these options from our partnering brewery tour buses!