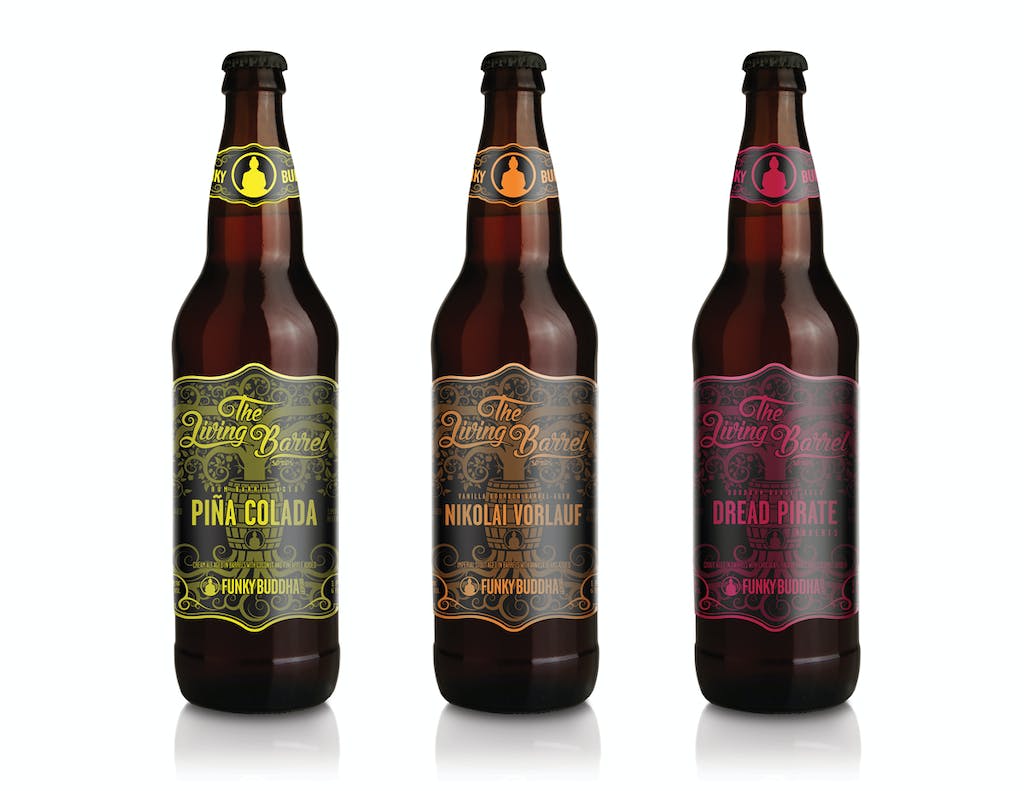 Funky Buddha is proud to announce The Living Barrel Series, its latest line of specialty beers with a new, enlightened look. A bit about the series:

“Like the spiraling growth of a tree’s branches, so too are these beers transformed over time thanks to the maturation exclusively in oak wine and spirits casks. Unlike the ageless timber, these bottles are only available for a limited time.”

As Funky Buddha has grown so has its barrel-aging program. Our current barrel cellar consists of over five hundred oak casks of all types. On the floor right now are hundreds of Bourbon barrels filled with everything from imperial stout to double brown ales; saisons aging in Chardonnay casks; and a multitude of unique wine and spirits casks including rum, tequila, and even luscious Cabernet. Each beer is sampled regularly to examine how the beer has matured and picked up characteristic of the barrel, which can lend everything from boozy complexity to subtle hints of spice and vanilla.

In upcoming months and moving into 2018, beers in The Living Barrel series will be released in 22 ounce bottles through our tap room – some of the beers will go to distribution throughout Florida as well. The first two, as seen above, are set to be released exculsively in our tap room on July 30th, starting at 11:30am. 22 ounce bottle will go on sale for $20 each with limits TBD. These include Rum Barrel-Aged Pina Colada, an imperial cream ale made with real pineapple and coconut and aged in Jamaican rum casks for months; and Vanilla Bourbon Barrel-aged Nikolai Vorlauf, our Imperial Russian Stout aged for nearly two years in Bourbon barrels with whole vanilla beans added to the barrel. The third announced release, Bourbon Barrel-Aged Dread Pirate Roberts (imperial stout with raspberries, chocolate, and coconut), will be released exclusively to our Imperial Club members in August, with any remaining bottles released to the general public thereafter.

Future releases include our 2017 iterations of Morning Wood and Last Buffalo in the Park, plus a host of other surprises to come.

Keep an eye on our website and social media channels for more info on The Living Barrel series as it develops. Cheers!