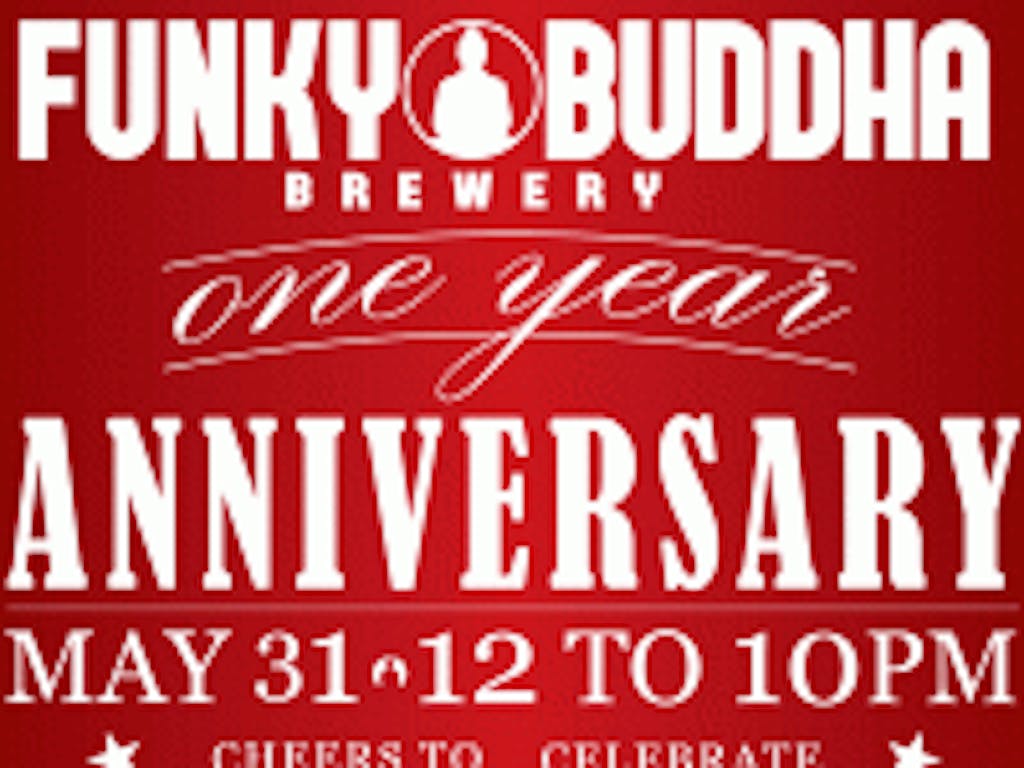 Our One Year Anniversary Party and Festival is on May 31… Let’s Party!

We can’t believe it’s almost been a year since we’ve opened already! This amazing journey has flown by so quickly, and we have all of our fans and supporters to thank. Since we’re feeling rather celebratory, we’ve decided that on May 31, 2014, we’re going to close down 38th street in front of the brewery, invite all of our friends over, tap some beers, and have a good old fashioned party!

Of course we’ll have live music, a host of food trucks doing pairings and fun party food, and tons of special release beers. Some really cool stuff. Trust us – you’re going to like it.

This event will be similar to our past festivals, in that it will be indoors and outdoors in front of the brewery and run from noon to 10pm (we’ll stay open until midnight, naturally).

Music Schedule:
Live music will run from 1pm to 10pm.

Outside the Box Sandwich Co

A: Supervised minors are always welcome at Funky Buddha Brewery until 8 pm.

Q: Can I bring my dogs/monkeys/parakeets?

A: Well-behaved dogs are permitted on our grounds, but not inside the tap room. Please leave your pet pigs, alligators, and wildebeasts at home. Thanks!

Q: What beers will be on draft? Do we need tickets to purchase beers?

A: See the tap list above. Tickets will be required to purchase all beers. $5 = one ticket = one beer. Pour sizes may vary. We will take credit cards for ticket sales. Tickets are good for May 31, 2014 only. All sales are final.

Q: I hate waiting in line for beers! How are you guys planning to deal with the big crowd?

A: Good question! Firstly, we’re using tickets, which alleviates the need for a transaction with every beer dispensed. Second, we will use four dispense points throughout the festival grounds with limited tappings on all points. Third, we are separating the bar into a section for day-long beers and one for timed tappings. We feel that worked very well during Maple Bacon Coffee Porter Day to keep things moving fast and get beers to people quickly.

Q: Will there be tours?

A: We are looking into hosting tours for the anniversary – please check back for an official announcement.

Q: Will food be available?

A: Yes. We will have multiple food trucks throughout the day with beer pairings and special dishes. See above trucks.

Q: Will growlers be available for purchase?

A: Not on this day, sorry. Growler fills will resume on Sunday, June 1.

A: We will not be permitting outside alcohol of any kind in the tap room or around the festival grounds. Thank you for your cooperation.

Q: Is there a good place to stay if I’m coming from out of town?

A: Yes, the Westin Fort Lauderdale has a special rate available for Funky Buddha Brewery guests. Please visit our booking portal to take advantage of it. The hotel will also run a shuttle to the event for guests.

Q: Where can we park?

A: You may park in the following lots:
-The public lot directly south of the main tap room entrance.
-Either of the grass fields across Dixie Highway
-The east lot that runs behind the brewery
Please do not park on our neighbor’s lawns or in front of their driveways!

Celebrate where it all began the night before our anniversary! Note: the below takes place at The Funky Buddha Lounge in Boca Raton, NOT at the Brewery in Oakland Park!