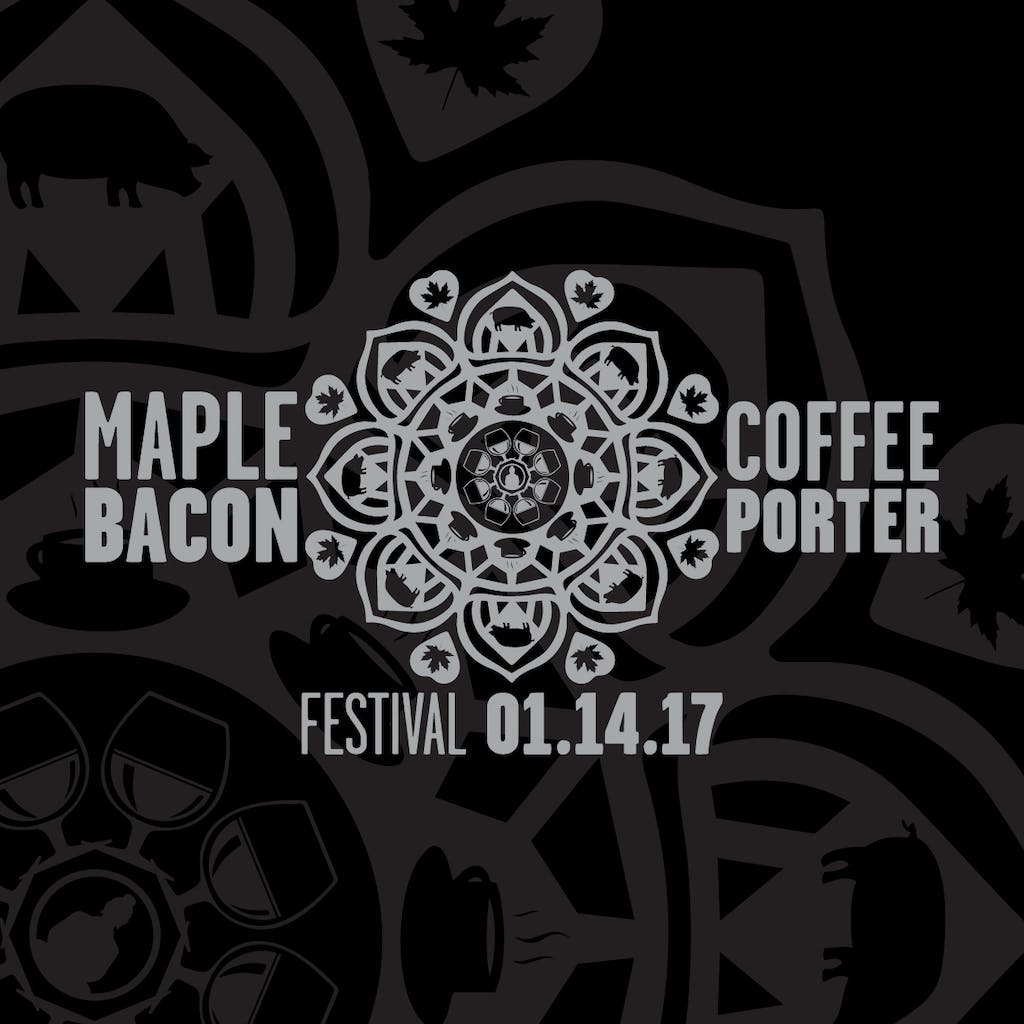 Funky Buddha’s epic Maple Bacon Coffee Porter returns on January 14th, this time with a new beer festival format featuring over 100 beers to taste from Florida and beyond. Advance festival tickets will allow you the option to pre-purchase guaranteed Maple Bacon Coffee Porter bottles in quantities of 4 or 12 bottles with the added benefit of purchasing additional bottles on the day of the event. Any bottles left unsold will be released to the public on Sunday, January 15th, and, for the first time ever, leftover bottles of MBCP will hit distribution at the end of January.

THE MORNING AFTER PARTY:

Date: Saturday, January 14, 2017
Festival hours: 1-5p.m.
Ticket Holder Bottle Pickup & Sales: Pre-order available at time of advance ticket purchase in one case (12) or four bottle allotments. Additional bottles will be available for purchase at the festival for ticket holders. Bottle pick-up and sales upon exit from festival grounds. Bottle pickup good for day of event only. Ticket holders must be present to receive bottles. Bottles will not be held for ticket holders after festival close.

*All ticket sales are final. No rain checks or refunds will be given. Attendees must be present to receive bottles. One ticket per attendee, one attendee per ticket. Ticket sales conducted with a max of 4 tickets per transaction. No reentry. Adults aged 21 and over only.

Public Bottle Sales: Remaining bottles will be available to the public beginning Sunday, January 15th, 2017 in the back lot behind the brewery
Hours: 11:30am-6pm
Cost: $15 per bottle, limit and case count TBD

For the first time ever, bottles of MBCP will hit distribution to retailers throughout the state of Florida two weeks following the festival. Read more about this exciting news below:

A note from Funky Buddha Brewery on distribution of MBCP:

By now you’ve probably heard the news that our annual Maple Bacon Coffee Porter Fest will be returning on Saturday, January 14th, 2017 with an all new format. For the festival’s fourth iteration we decided to do away with the need for festival-goers to purchase tickets for individual beers, and instead make the event a “beer fest” format with unlimited beer sampling of over 100 beers from us and our closest brewery friends. This is a big change for us, but we truly believe with what we’ve learned running events over the past four years, the new format, and the quality of beers we”ll be presenting that this festival will be our best one yet. Many people are already excited about the news that tickets will be going on sale on Monday, November 21 via IMG Tickets – which will allow you to preorder up to a case of beer to pick up at the festival. But we also have some other big news to share with you: Funky Buddha is proud to announce that for the first time ever, bottles of Maple Bacon Coffee Porter will be sold to retailers throughout the state of Florida too.

This move represents a big change for us and one that we thought deeply about. On site only bottle releases such as what we’ve done with MBCP have been a way for breweries all across the country to foster excitement and anticipation for their beers. That strategy has certainly worked for us, and as a result we’ve built a festival that thousands of people attend each year. But that scenario invariably means that only a very small percentage of people that drink Funky Buddha beers on a regular basis will actually get to try Maple Bacon Coffee Porter. And one of the reasons we decided to create MBCP Fest in the first place was to celebrate this beer that helped put us on the map. Since it was first brewed at the Funky Buddha Lounge & Brewery in Boca Raton back in 2011, MBCP’s combination of fresh-roasted coffee, sweet maple syrup, and smokey bacon in a full-bodied porter has become legendary. Just this year, the beer won the Gold Medal in the Specialty Beer category at the World Beer Cup. Knowing all this, we thought to ourselves: shouldn’t more of our fans have an opportunity to try this beer? Ultimately, we decided that the answer to that question is yes. And so, this year we will be making more Maple Bacon Coffee Porter to share with festival goers and the rest of Florida too. We are not yet firm on how many bottles will make it to distribution, but we can say it will still be very limited in comparison to, say, quantities of our Little Buddha Small Batch series.

So to recap: Festival goers will be guaranteed up to a case of MBCP via pre-order. They will also be able to purchase extra bottles on the day of the event. Then, on Sunday, January 15th, we will release bottles for sale to the public (non ticket holders) at our brewery while supplies last. We’ll also be hosting a hangover brunch on Sunday for the truly hard core, featuring MBCP in bottles and on draft (plus lots of other great beers for sale too). Finally, we expect the remaining MBCP bottles to hit distribution throughout Florida around two weeks after that. Phew!

Remember, one case preorder admission tickets to the Festival go on sale on Monday, November 21st at 10am. Four bottle and pure GA tickets will go on sale later in the week. Thank you all for supporting us over the years, and we hope to party with you in January!

Q: How many bottles of Maple Bacon Coffee Porter can I buy?
A: Festival attendees will be able to pre-order bottles via different ticket levels. One case (12 bottle) tickets go on sale on November 21st, four bottle tickets go on sale on November 23rd. Attendees will also be able to purchase additional bottles at the festival with bottle limits TBD. Tickets can be purchased via IMG Tickets (link to come). You can also pre-order bottles in four bottle or one case allotments by attending our Maple Bacon Coffee Porter Hangover Brunch on Sunday, January 15th. Any unsold bottles following the festival will be released to the public on Sunday, January 15th. Remaining bottles will also hit retail distribution in very limited quantities approximately two weeks following the festival.

Q: Will MBCP be distributed outside of the festival or brewery?
A: Yes. For the first time ever, we will be sending very limited quantities of MBCP to distribution at retailers throughout the state of Florida. Distribution will take place approximately two weeks following the festival, and will be very limited in nature. The best way to secure bottles will be to guarantee preorder by purchasing tickets tickets to MBCP Fest on January 14th, or our MBCP Hangover Brunch on January 15th.

Q: How much will Maple Bacon Coffee Porter cost?
A: Bottles cost $15 each - some bottles are included in different ticket options.

Q: Will there be any day-of ticket sales?
A: At this time, all ticket sales will be done in advance. Tickets will go on sale on November 21st at 10a.m. via IMG Tickets.

Q: Can I bring bottles to share?
A: Outside alcohol, food, or drink will not be permitted inside the festival grounds. Unfortunately, we do not have liquor license access extending into adjacent parking lots - so should you choose to bottle share in lots nearby, you do so at your own risk.

Q: Can I bring my dogs/monkeys/parakeets?
A: We're sorry, but animals are not permitted on the festival grounds.

Q: What beers will be on draft? Do we need tickets to purchase beers?
A: See the tap list above. You will not need to purchase beers once in the festival. You will be given a souvenir sample cup upon entry which can be used to taste 2oz samples of beer at any of the stations set up throughout the festival. Sample pourers will be instructed to follow safe service standards and will refuse service to individuals who are openly intoxicated. Please be responsible!

Q: Will your tap room be open during the event?
A: Our tap room and brewery will be closed during the festival but will open on January 14th starting at 6p.m. On January 15th we will resume normal hours of operation. We will have some fun beers on tap throughout the weekend in the tap room as well.

Q: Will food be available?
A: Yes. Craft Food Counter & Kitchen will be on site serving yummy grub, as well as a collection of South Florida's best food trucks.

Q: Will growlers be available for purchase?
A: No - growlers will not be for sale at the festival.

Q: Is there a good place to stay if I'm coming from out of town?
A: Yes, we have a great corporate rate at the Courtyard by Marriott Fort Lauderdale East. Festival goers will enjoy complimentary shuttle service, free breakfast, free parking, free wi-fi, and will even be able to purchase Funky Buddha beers in their lobby bar!

Q: Where can we park?
A: We strongly recommend that attendees carpool or ride share to the festival!
You may park in the following lots. Parking will cost $5 unless otherwise noted
-The public lot directly south of the main tap room entrance. (no fee)
-Either of the grass fields on the west side of Dixie Highway and 38th Street
Please do not park on our neighbor's lawns, or in front of their driveways, or in front of businesses down the plaza along Dixie Highway. Our neighbors may tow!

Q: Are there any public transportation options to the festival?
A: Yes! UBER is the official ride sharing program of Maple Bacon Coffee Porter Fest 2017. Check back for offers from UBER and other public transport partners.