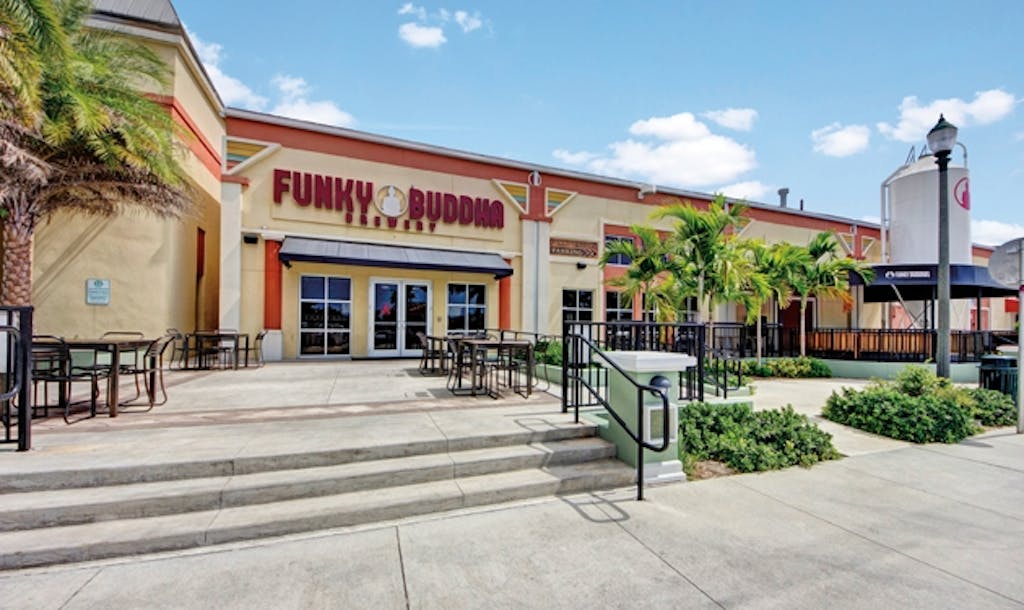 “Hip” and “trendy” have never been words that dripped off the tongue when discussing Oakland Park. But a mixture of ambitious plans from city hall, comparatively low rents and a handful of pioneering businesses are changing the place’s look and feel.

In one of the hottest brewery taprooms in the area, the game is on the TV sets, bartenders pull from Buddha beer tap handles, friends challenge each other to rounds of cornhole in the game room, and a crash of giant Jenga pieces crumbles to the floor.

Next door, Alberte’s Restaurant serves up authentic Caribbean cuisine. Across the street, hipsters wait their turn to play the favorite video games from their childhoods at video game bar Tenth Level Tavern. A couple blocks down the road, a server presents a plate of fried chicken at Kelvin 3200.

After a week of work, this crowd has chosen to spend their night in Oakland Park. Not Himmarshee, not Las Olas, not Beach Place.

“A couple of years ago, I was getting a lot of phone calls from different people who wanted to do stories, whether it be print or otherwise,” says Kathleen Margoles, Oakland Park’s community and economic development director. “I remember this one guy said to me, ‘When I was a kid, my dad used to take me out there on the weekends to buy hardware and parts in the warehouse in Oakland Park, and now I go and drink beer in one of the coolest places.’ To me, that really exemplified the change and it has been fast.”

A city of nearly 44,000 residents, its 8 square miles sits wedged between Fort Lauderdale and Pompano Beach. Founded in 1925 as the town of Floranada, it had its early ups and downs until locals decided to rename the town to Oakland Park and revitalize the neighborhood. For years it was seen as a place one had to drive through to get to the highway; a sleepy, blue-collar suburb featuring functional, unglamorous retail. Memories abound of it being one of the last farming communities on the east side of Broward County. Now however, the modest city is putting itself on the map in a different way.

Funky Buddha now serves as the de facto capital of this new Oakland Park, drawing thousands to their anniversary block parties, keg taps and community events. KC Sentz joined the Funky Buddha venture in 2012 when his brother, Ryan, was looking to expand its original Boca Raton lounge. The two searched for six months from North Miami all the way up to West Palm Beach for a space that could accommodate their plans to open a brewery and taproom.