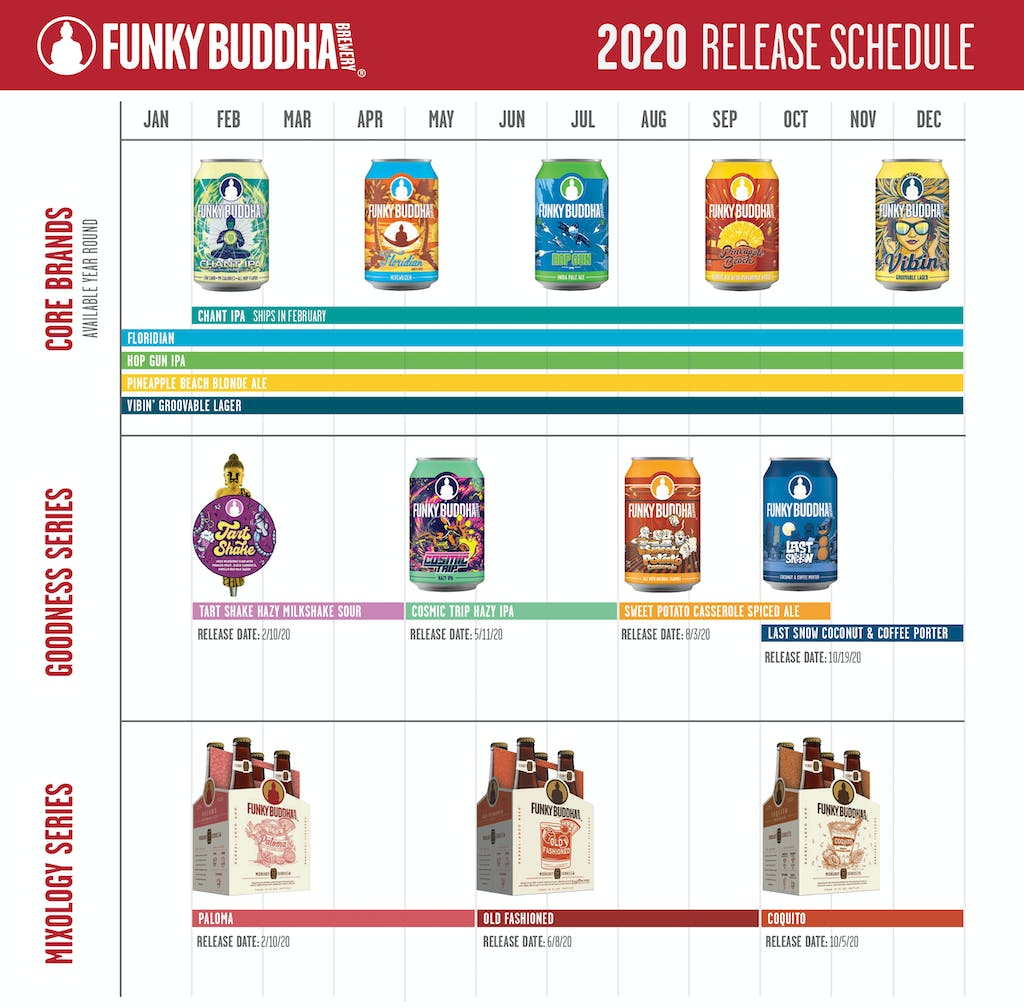 New year, new beer!
Since 2013, Funky Buddha has taken beer drinkers on a journey through brewing innovation and imagination. We believe in life-affirming experiences defined by being diverse, inclusive, fun, funky, and always unique. In 2020, we will carry on this mantra with new experimental beers, funky favorites, and much more. Check out all of the details below!

Our Core Brands are a lineup of balanced, year-round beers meant for all occasions. Floridian, Hop Gun, Pineapple Beach, and Vibin’ will be returning to the series. New this year is Chant Repeatable IPA! Low in calories and carbs but high on hop flavor, Chant is a supremely crushable ale that channels notes of citrus, mango, and pine from the addition of Mosaic hops. Chant IPA will be available in 12oz can 6-packs starting in February.

Our Goodness Series seasonal releases will return in 12oz can 6-packs! We have some new brews entering the series including Tart Shake Hazy Milkshake Sour Ale and Cosmic Trip Hazy IPA. And after an enormous amount of requests from all you funky fans, we are excited to bring back Sweet Potato Casserole and Last Snow.

Cheers to another year of barrel-aging innovation and experimentation with the Mixology Series. This line of cocktail-inspired beers will return in 12oz bottle 4-packs. We will be releasing an all new lineup of beers paying homage to an American staple, a timeless Italian drink, and a popular Mexican libation.

We’re excited to introduce Funky Buddha Natural Hard Seltzers! Made with real agave nectar, pure cane sugar, and natural fruit flavors, these premium beverages offer a guilt-free alternative with a clear purpose. The seltzers will be launched in variety 12-packs consisting of bright, refreshing flavors like Lush Key Lime Cherry, Tropical Mango Guava, Crisp Pink Grapefruit, and Juicy Blood Orange. With only 90 calories, 1g carbs, and 0g sugar, these bubbly bevy’s are a perfect pair to an active and enlightened lifestyle. 12-packs will be available in the South Florida area starting in March.

Available exclusively in the Southeast Florida market, this line of limited releases will be a showcase of bold, innovative beers that marry culinary-inspired ingredients with time-honored technique. These releases will be available in 12oz bottle 4-packs. They will be released throughout the year so stay tuned to our social media channels for updates! (list subject to change)

The Living Barrel Series is back with small batch, barrel-aged beers. A majority of the releases will remain in the tap room with a few being released to the South Florida market.

This year we’ll also see special release drafts, tap room exclusives, and other limited offerings. You never know what we might do, so stay tuned to our social media channels for updates!