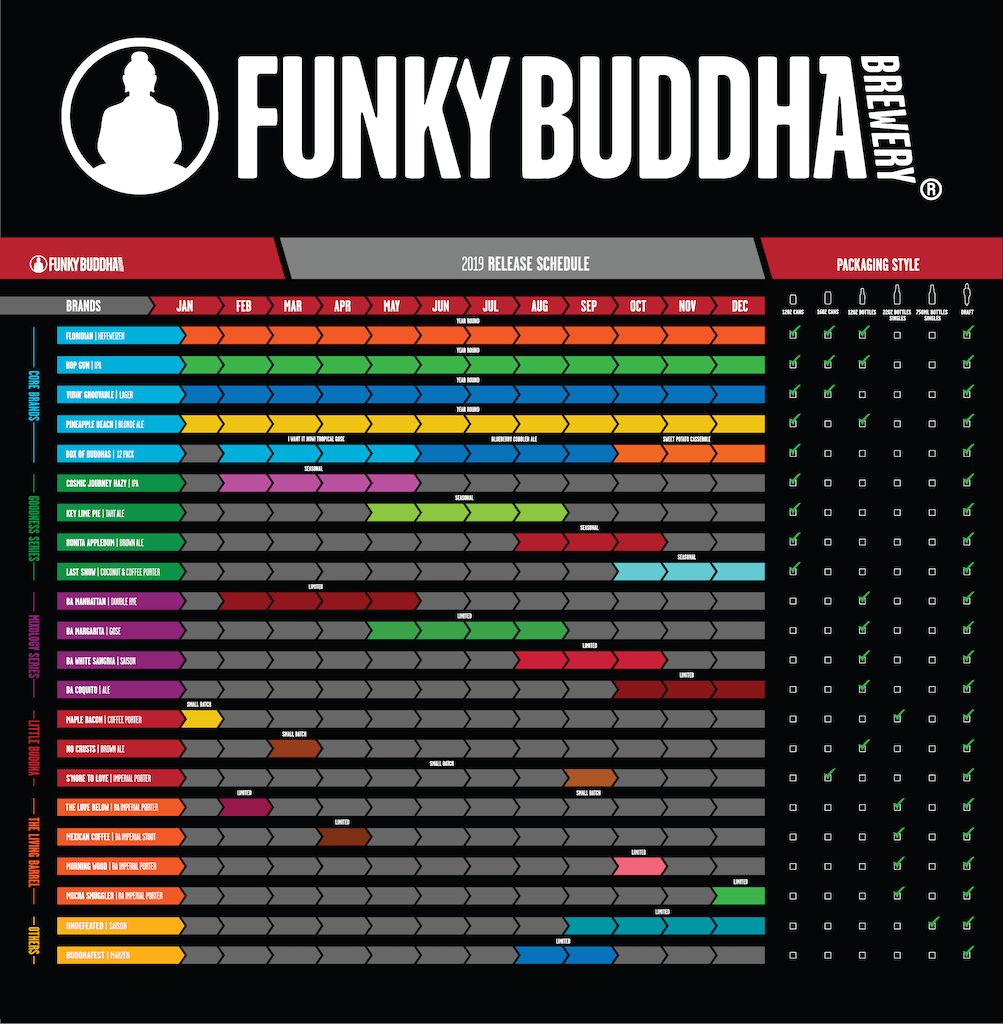 We are stoked to announce our new release schedule and give some insight on all the goodness going down in 2019. We have some big changes coming this year including new products and packages. Check out all of the details below!

Variety is the spice of beer life! That’s why we’re coming at you with our first ever variety 12-pack starting in March. Box of Buddhas will be packed with a dozen 12oz cans including three each of Floridian, Hop Gun, and Vibin’; plus three cans of an exclusive rotating seasonal from memory lane that will not be available in any other packaging. I Want It Now! will be the first to hit the pack in Spring before bringing back Blueberry Cobbler as the year goes on.

Our Goodness Series seasonal releases will be transitioning to 6-pack 12oz cans at a new price of $12.99! To go with this big change, we have several new beers in the series including Cosmic Journey, a hazy IPA with guava and papaya, and Bonita Applebum, an old-school favorite that will be packaged for the first time ever. Returning is Key Lime Pie Tart and Last Snow, which will join the series as our winter release. Yes, Last Snow will be canned in 6-packs and available ALL WINTER LONG!

Next up, we are debuting a brand-new barrel-aged series called The Mixology Series! This line of 4-pack 12oz bottles will recreate classic cocktails by using alternate fermentables, natural ingredients, and barrel-aging techniques. To produce these unique beers we’ve partnered with several respected wine & spirits producers like Casa Noble Tequila, High West Distillery, and The Dreaming Tree Wines. Look out for this series starting in March at a pretty killer price of $14.99 per 4-pack.

The Little Buddha Small Batch series returns with some new products and packaging! Juicy Smalls East Side IPA and S’More To Love join the squad. Both beers will be packaged in 16oz cans with S’More To Love in singles.

Finally, the Living Barrel Series is back with some funky favorites and new friends! Mocha Smuggler imperial porter will be joining the lineup. The series will remain under the 22oz bottle format. Go big or go home!

This year we’ll also see releases of limited Living Barrel Series beers, special release drafts, tap room exclusives, and other limited offerings. You never know what we might do, so stay tuned to our social media channels for updates on release dates, special releases, events, and more!