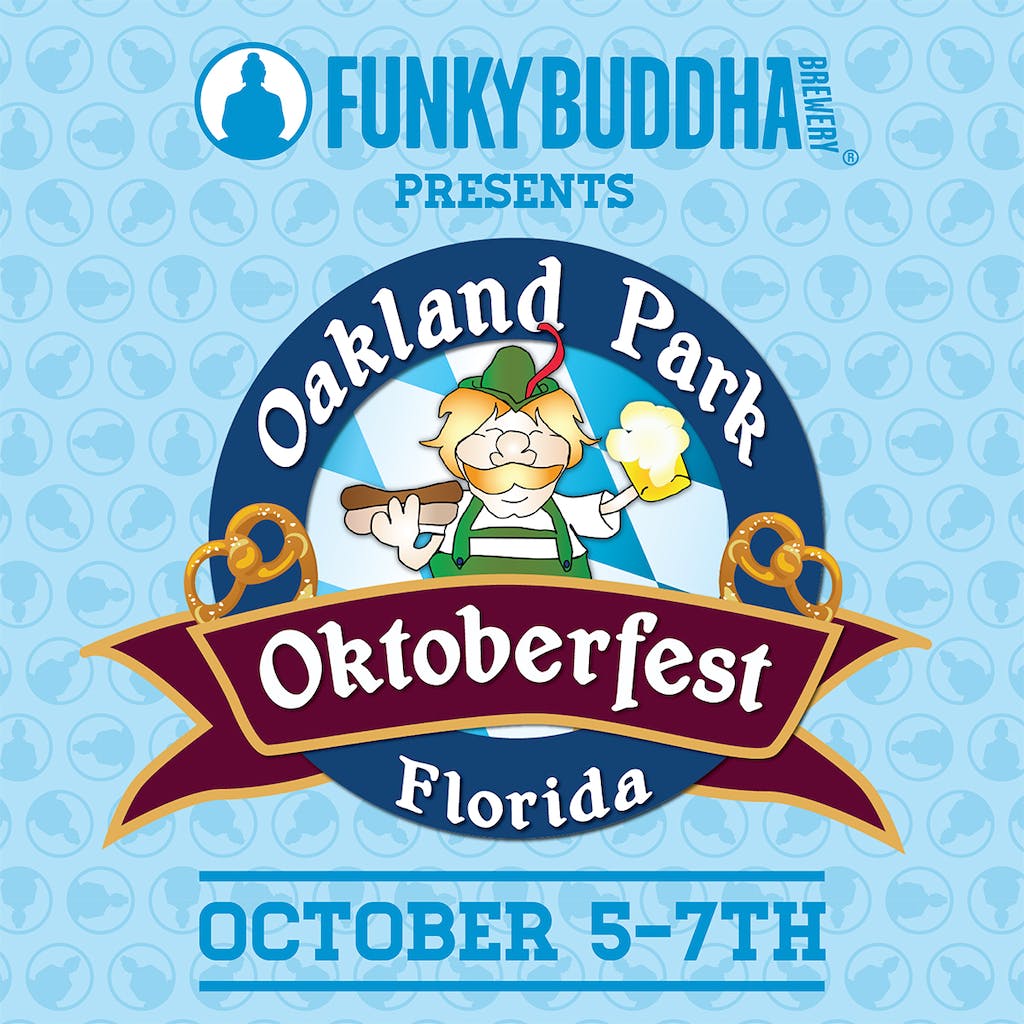 $5 admission for ages twelve and older

Children twelve and under admitted for free

Bust out the lederhosen: Funky Buddha brewery is enlightening Oakland Park’s Oktoberfest October 5th-7th at Jaco Pastorius Park! We’ll be bringing Funky Buddha beers, yummy grub from our Craft Food Counter & Kitchen, lawn games, and our signature funky style so we can take this year’s Oktoberfest to a higher plane of existence.

Note that tickets are required for food and beverage and will be sold at ticket booth locations throughout the event.

Floridian Hefeweizen: Our unfiltered and refreshing German-style wheat beer is full on flavor yet light on the palate. Authentic hefeweizen yeast creates the compelling aromas of bananas, citrus, and cloves, while the all wheat and malt body perfectly captures the brilliance of a golden Florida sunset. 5.2% ABV

Buddhafest Marzen: We’re celebrating Oktoberfest with a true German festbier! Our Oktoberfest Marzen is brewed with Munich malts for a deep amber color and a bready flavor that makes it the perfect compliment to German food. 6% ABV

Vibin’ Groovable Lager: Best consumed with tasty tunes, Vibin’ is a Groovable Lager that’s smooth as a righteous riff. Its golden-pale body and delicate, noble hop harmony makes for a balanced experience that leaves you ready to feel the vibrations! 5% ABV

Hop Gun IPA: If you’re looking for hops, we’ve got your tail. Hop Gun IPA delivers a payload of good ol’ American hops straight to your palate, bursting forth with the flavors of grapefruit and pineapple. A careful dose of smooth caramel malts swoop in to balance out the finish — just like any good wingman should. ABV 7%

Last Snow Coconut & Coffee Porter:  Last Snow is an ode to that special time in Florida where the needle dips just south of 75 – even for the briefest of moments. This rich, creamy porter is layered with coconut and freshly-roasted coffee for a taste that recalls a winter wonderland – even if, in our state, that’s just a state of mind. 6.3% ABV (only available in 12oz pour)

Good beer and great food: now that’s a match made in heaven! Our very own Craft Food Counter and Kitchen will be bringing the heat to this year’s Oktoberfest with some tasty German-inspired dishes along with a few funky favorites.

Tap Room Pretzel $6
Our famous pretzel is made with spent grain from Floridian Hefeweizen and the beer itself. Served with whole grain ale mustard and Fuhgeddaboudit Red Ale beer cheese OR served as a dessert pretzel dipped in cinnamon and sugar and served with peanut butter nutella bacon dip or blueberry cream cheese frosting.

Grilled Bratwurst $8
A Funky Buddha specialty, beer-braised then grilled and served with our brewer’s cabbage, ale mustard, and caramelized onions on a fresh-baked poppy seed bun.

Brought to you by:

Drinking in the Dark
Funky Fight Night: Mayweather vs. McGregor