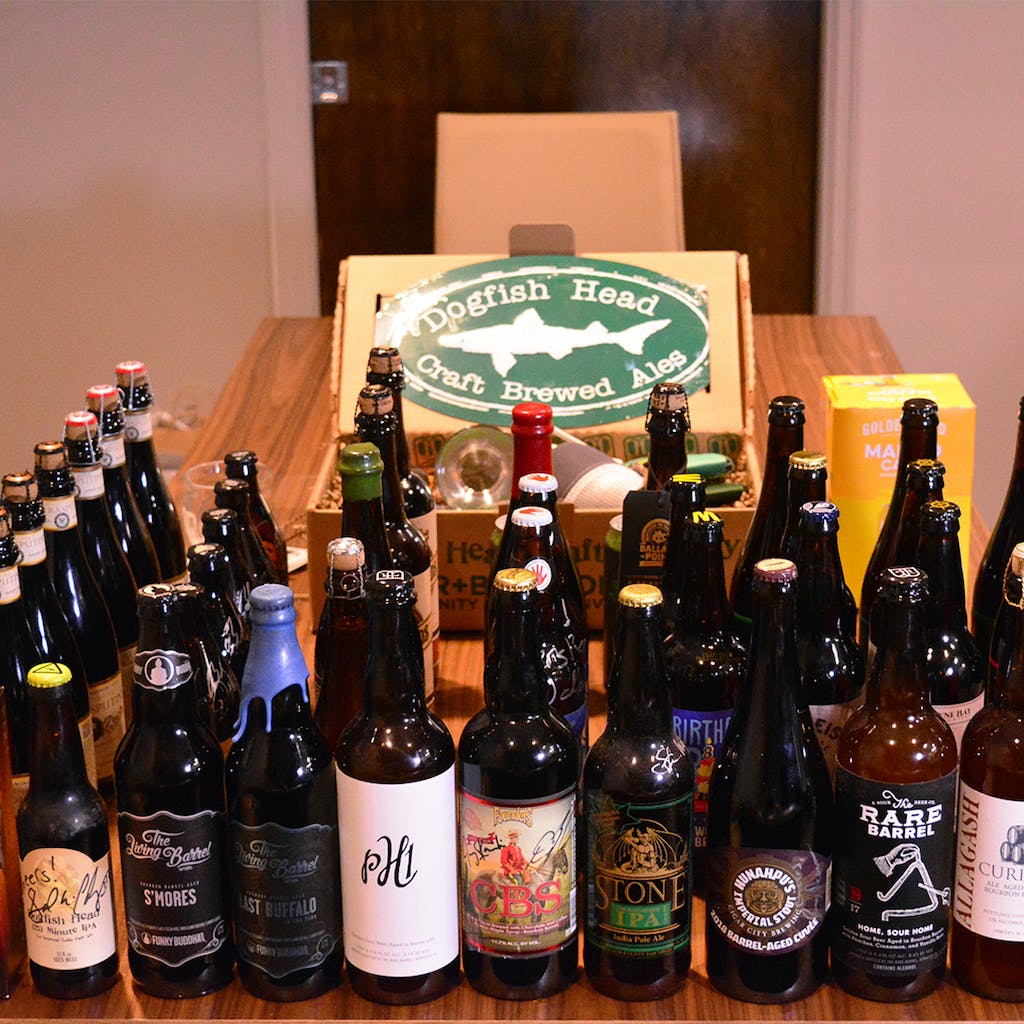 Beer fam, we need your help – brewers nationwide have come together with the Parkland Golf & Country Club to create an unreal lot of vintage and rare beers to benefit those affected by the horrific Marjory Stoneman Douglas tragedy. This lot will be auctioned off online starting at 1pm on April 5th at https://one.bidpal.net/wearemsd, with all proceeds benefiting Broward Education Foundation‘s Marjory Stoneman Douglas fund. In addition to featuring amazing beers, nearly all of these bottles are signed by brewers and founders like Sam Calagione of Dogfish Head, Michael Kane of Kane Brewing, Joey Redner of Cigar City, and much more. The auction will be live through Sunday, April 8th. Due to auction regulations this lot is for local pickup only.

CRAFT BREWERS NATIONWIDE COLLABORATE ON EPIC BOTTLE LOT AUCTION FOR ‘WE ARE STONEMAN DOUGLAS’ CHARITY EVENT
50 vintage and rare signed bottles from over two dozen breweries will auction online to raise funds for victims’ families and survivors of the tragic Parkland, FL shooting.

OAKLAND PARK, FL (April 4, 2018) – Following the horrific events at Marjory Stoneman Douglas High School in Parkland, Florida this past February, brewers from across the country are coming together to offer assistance and support to those affected most. Over two dozen brewers nationwide have donated rare and vintage bottles of beer — many of which are signed by owners, founders, and head brewers from companies such as Stone Brewing, Sierra Nevada, Dogfish Head, and more — in what has become an epic and unique lot of craft beer for the ages.

This lot is being auctioned online via the We Are Stoneman Douglas site (https://one.bidpal.net/wearemsd), with proceeds benefiting the Broward Education Foundation’s We are Stoneman Douglas fund. One hundred percent of all funds generated by this auction will directly benefit the families of victims, survivors, and those affected by this tragedy. A second lot of signed barrel-aged and vintage beers from Funky Buddha Brewery will also be auctioned.

This online auction (with over 50 other incredible auction items) is being organized by the Parkland Golf & Country Club located in Parkland, FL with assistance from Funky Buddha Brewery in Oakland Park, Florida. Individuals can bid on the online auctions through Sunday, April 8th. Due to regulations, these bottle lots will be available for local pickup only.

“This has been an amazing show of support and solidarity from brewers around the country, most of whom signed on and contributed unbelievable beers within minutes,” says Ryan Sentz, co-founder of Funky Buddha Brewery and Marjory Stoneman Douglas High School graduate. “Although this tragedy was horrific beyond words, we can take heart in the incredible response from the community and others that shows we have the strength and bravery to rise above it and make a true difference in people’s lives.”

About Constellation Brands
Constellation Brands (NYSE: STZ and STZ.B), a Fortune 500® company, is a leading international producer and marketer of beer, wine and spirits with operations in the U.S., Mexico, New Zealand, Italy and Canada. Constellation is the No. 3 beer company in the U.S. with high-end, iconic imported brands such as Corona Extra, Corona Light, Modelo Especial, Modelo Negra and Pacifico. The company’s beer portfolio also includes Ballast Point, one of the most awarded craft brewers in the U.S. In addition, Constellation is the world leader in premium wine, selling great brands that people love, including Robert Mondavi, Clos du Bois, Kim Crawford, Meiomi, Mark West, Franciscan Estate, Ruffino and The Prisoner. The company’s premium spirits brands include SVEDKA Vodka, Casa Noble Tequila and High West Whiskey. Based in Victor, N.Y., the company believes that industry leadership involves a commitment to brand building, our trade partners, the environment, our investors and to consumers around the world who choose our products when celebrating big moments or enjoying quiet ones. Founded in 1945, Constellation has grown to become a significant player in the beverage alcohol industry with more than 100 brands in its portfolio, about 40 facilities and approximately 9,000 talented employees. We express our company vision: to elevate life with every glass raised. To learn more, visit www.cbrands.com.

About Broward Education Foundation
Broward Education Foundation set up the official Stoneman Douglas Fund for the benefit of victims’ families, survivors and those impacted by this horrific event. Broward Education Foundation is the only registered 501(c)3 charitable organization solely dedicated to raising funds for students and teachers in Broward County Public Schools. BEF enlisted the aid of experts in the field of mass violence, in consultation with the Florida Attorney General Pam Bondi immediately and mobilized to create the official GoFundMe.com/stonemandouglasfund with the GFM executive team. BEF is partnering with the National Center for Victims of Crime, who advocate for victims and administer the National Compassion Fund and has also enacted a mobile giving campaign (text PARKLAND to 20222.) One hundred percent of all funds donated to the Stoneman Douglas Victims Fund will be distributed to victims’ families, survivors and those impacted. For more about Broward Education Foundation, please visit browardeducationfoundation.com.

About Parkland Golf & Country Club / Toll Golf:
Just under three miles from MSD High School is a close-knit community. Parkland GCC is a one of a kind, family-focused, luxurious community that offers the perfect combination of active recreational living and convenience. Toll Golf is the golf development and operations division of Toll Brothers, Inc. Formed in 1998, Toll Golf assists with the concept, development, construction, and the day-to- day operations of the golf and country club amenities located within Toll Brothers residential country club developments. For more information about the Toll Golf and Country Club division and their luxury country clubs, visit TollGolf.com.