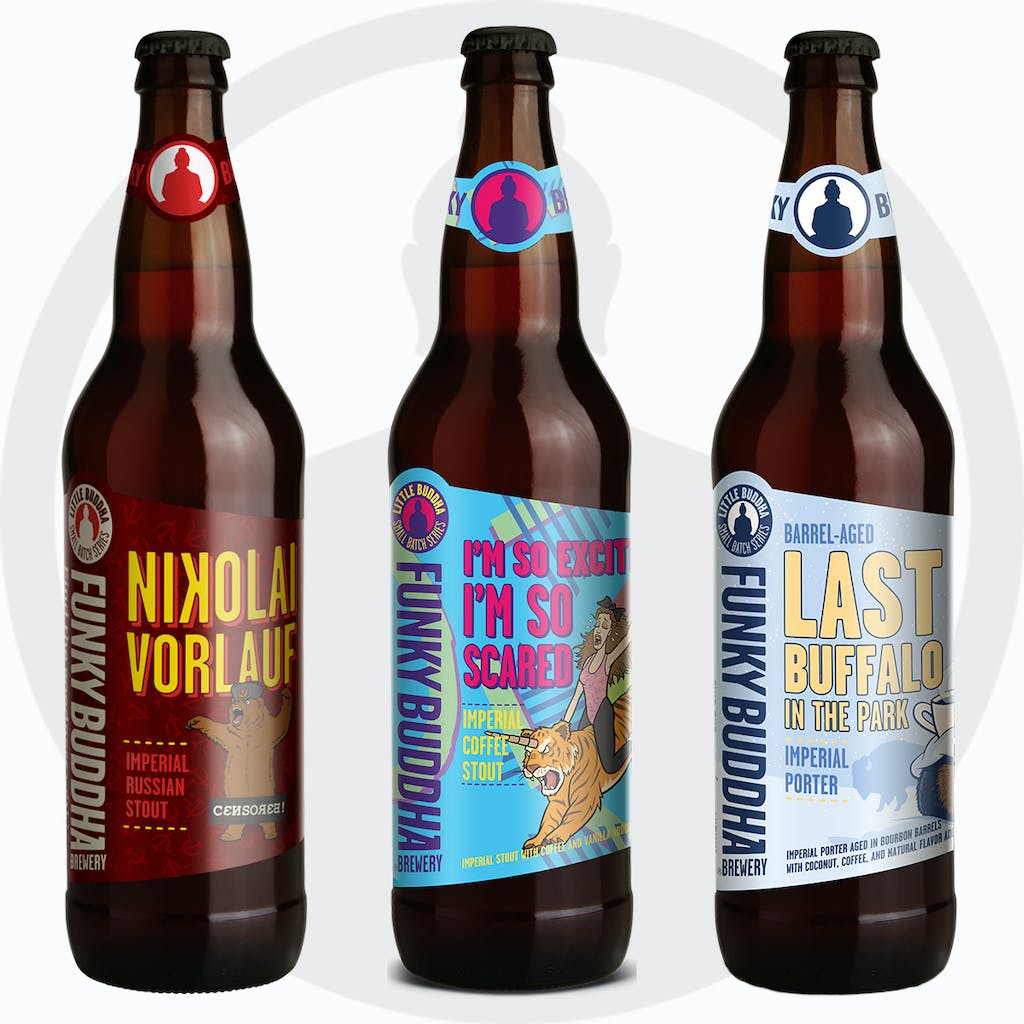 Boy are these going to be some of the happiest of holidays here at the Buddha. We have three funky heavy hitters that are scheduled to be released this month.

The first to step up to the plate is Nikolai Vorlauf, our take on a classic Russian Imperial Stout. This funky favorite achieves a thick body using oats and lactose. That body is complimented by plenty of complex chocolate, cocoa, and caramel undertones, before finishing on a balanced roasty note. This big, bear-huggin beer’s name was inspired by Nikolai Volkoff, a Russian, professional wrestler who is best known for his ass-kicking performances on the WWE. Vorlauf is a brewing related play on words which actually is the process of clarifying wort (pre-beer) by transferring liquid at the bottom of the mash tun into another vessel, then softly pouring it back on top of the mashed grains. Oh yeah one more fun fact, Nikolai Vorlauf was our second 22oz bottled beer to go into distribution.

This year we are taking care of the locals and visiting beer enthusiasts by selling this historic, fan favorite exclusively here at the Oakland Park brewery. 22-ounce bottles will go on sale for $10 a pop. Bottles go on sale December 20th at 11:30 a.m. with a limit of six bottles per person.

We are really, really eager and a little anxious to announce that I’m So Excited, I’m So Scared is also dropping this month. This ferociously coffee-d imperial stout is just like grabbing a booth at The Max, then hunkering down for a study sesh’ with a big pot o’ joe. The coffee aroma is so good it’ll have you yelling “FRESH POTS!” Rock and roll? You ain’t seen nothing yet. This caffeinated queen was inspired by the classic Jessie Spano caffeine meltdown on Saved by the Bell. Here’s a quick video reminder.

22-ounce bottles will go on sale for $13 a bottle, on December 20th at 11:30 a.m. with a limit of six bottles per person. If you can’t make it to the brewery, no worries. I’m So Excited I’m So Scared will go into statewide distribution shortly after the brewery release.

Last but definitely not least is Last Buffalo in the Park. For those of you who may not know, this Imperial version of our Last Snow porter is a rich, thick, decadent treat made with coconut and fresh roasted coffee, then aged in Buffalo Trace barrels for months to accentuate the vanilla and coconut notes. This rare and highly sought after beer was originally brewed in collaboration with our friends at Park Tavern in Delray Beach. They provided the barrels, we provided the beer and boom! Last Buffalo in the Park was born.

We’re bringing back this epic barrel-aged beauty this month in 22-Ounce bottles for $25 each, limit 3 bottles per person. You can expect this decadent treat to drop in our taproom on December 23rd starting as soon as we open our doors at 11:30 a.m. Last Buffalo is also going into statewide distribution for the first time shortly after the taproom release!